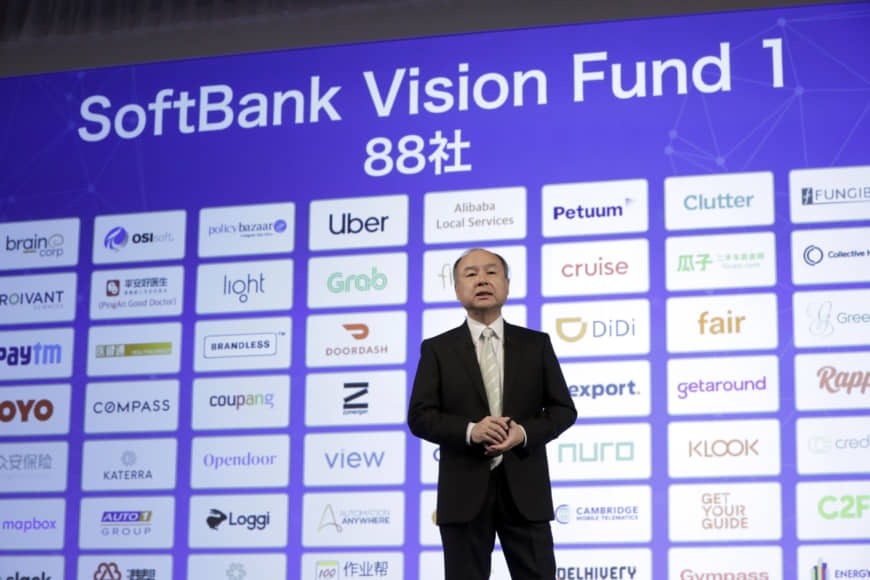 SoftBank Group Corp. founder Masayoshi Son said he is considering a new type of fund for startup investing, showing his determination to keep cutting deals after missteps with WeWork and several other companies.

The Japanese billionaire unveiled his $100 billion Vision Fund three years ago and had been planning on raising a similarly sized second Vision Fund. But as he discussed earnings in Tokyo Wednesday, he conceded that raising money from limited partners for the second fund has been difficult and he may instead make startup investments solely with SoftBank’s capital for a year or two.

“A lot of our planned investors have been worried by the trouble at WeWork and Uber and we heard their feedback,” Son said. “So before we officially launch SoftBank Vision Fund 2, maybe we start from a smaller scale and start from a shorter period in terms of investment as sort of a bridge.”

“So I’m beginning to think about that kind of two-step approach,” he said. “We have not made any official decision yet, but that’s one of the options that we started considering. Again, we have not come to a conclusion yet.”

Son’s somewhat opaque comments came after SoftBank reported that the Vision Fund had lost money for the second quarter in a row, reflecting the decreased value of startups it has backed. The Vision Fund lost ¥225.1 billion ($2.05 billion) for the three months ended in December, after losing ¥970.3 billion the quarter before including WeWork and Uber Technologies Inc.

“Mr. Son said that he may consider delaying SVF2 or a smaller SVF2. Given our view that SVF2 is a big risk, this statement is welcome,” said Atul Goyal, an analyst at Jefferies Group, in a research report.

SoftBank set up the original Vision Fund with money from outside investors, led by Saudi Arabia’s Public Investment Fund and Abu Dhabi’s Mubadala Investment Co. But for years before that, SoftBank made deals with its own capital, including early investments in Alibaba Group Holding Ltd. and Yahoo Corp. During the dot-com boom, Son took stakes in hundreds of internet companies.

Indeed, before the first Vision Fund, SoftBank set up an entity called Delta Fund that was used for startup deals, including some that eventually were moved into the Vision Fund. Son could simply inject capital into that vehicle. SoftBank had weighed contributing $40 billion to $50 billion of its own capital for the second fund, people familiar with the matter have said.

“We can make investment on our own or we can work with partners, new or existing,” Son said.

He did explain that SoftBank continues to back startups with its own money.

“We made several investments because we do have a very good pipeline,” Son said Wednesday. “It’s a hundreds of billions yen level.”

He added that he is no longer targeting $108 billion for the second fund and wasn’t precise about what the expected size would be.

“We shouldn’t be postponed too long,” he said. “First, make it a little bit smaller for one to two years, raise some bridge money, while were are building a track record. Then once we have results, I want to raise an official second fund.”

LEAVE A REPLYYour email address will not be published. Required fields are marked *Your Name コメントをキャンセル